"The Blanks" a.k.a. Ted's Band from Scrubs

I had forgotten to post this before the show, but here's another poster i did for an A Cappella group called "The Blanks" 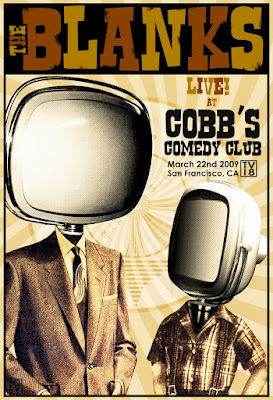 You might recognize them by their alter-ego's "Ted's Band" from the tv show "Scrubs". I love scrubs, i could watch it all day. It's one of those shows where i put in a dvd to watch 1 episode... and next thing i know, it's 6 hours later, and i've carved a nice ass-groove into the couch.

So Ted's Band is actually The Blanks, and they are an a cappella group that go around and do shows at comedy clubs, colleges, etc. Well i had the honor of creating a poster for their first show at Cobb's Comedy Club in San Francisco. I wish i could have gone to the show, but I did get to meet Sam (Ted on scrubs) at the Vans Warped Tour kickoff party at the Key Club on Thursday where TAT was playing.
Posted by Joebot at 1:35 PM 0 comments