***UPDATE***
Prints are available to purchase by clicking HERE.
Framed artwork has already sold before the show even opened! Thank you whoever you are :)

As soon as I saw the game at my local comic book store , I was hooked. Scorpion became my go-to fighter. I anxiously awaited Mortal Monday so that I could save my quarters and play the game at home on my Sega Genesis. When Gallery 1988 asked me to create some artwork for "The Old School Video Game Art Show: Level 2" I went with an instant classic. 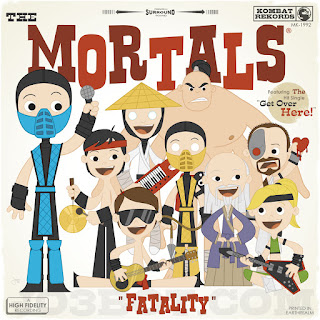 "Out of the arcades and into our hearts, it's the new hit album "Fatality" from The Mortals! Join Sub Zero, Scorpion, Liu Kang, and the rest of the gang as they punch out hit songs such as "Get Over Here!", "Toasty!" and "Finish Him". You're spine will tingle with glee, your heart will pound out of your chest, your soul will be theirs. So get ready to Test Your Might with The Mortals!" 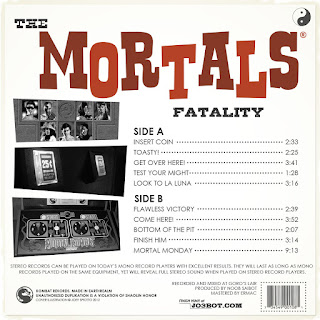 In addition to prints of the artwork, I always create a one of a kind framed album. For this show I was able to get my hands on a pretty rare, and pretty special record: 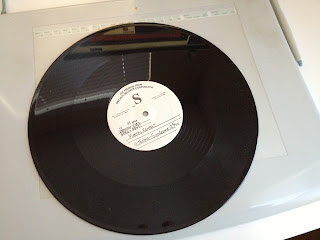 Yes... This record contains the amazing Mortal Kombat song from the opening of the 1995 film. Anytime I play this song, once is never enough... it usually goes on a loop for at least 6 playthroughs.

The framed album and artwork will be available to purchase exclusively at Gallery 1988 either in person or through their online store HERE.  **Artwork has sold** 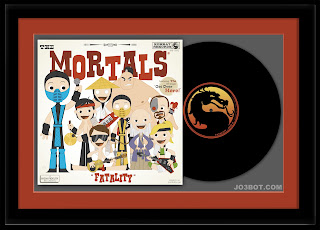 ***This post will be updated when artwork becomes available***

If you're a fan of video games, or were a fan of old school video games, this is a show for you. A lot of very talented and passionate artists have created some amazing artwork that you would be proud to hang on your wall. Come on down to The Old School Video Game Art Show: Level 2 at Gallery 1988 in Santa Monica! You don't even have to bring your quarters because it's free! 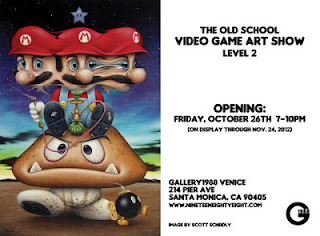 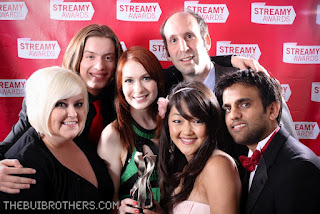 As stated by the all knowing Wikipedia, The Guild is "An American comedy web series created and written by Felicia Day, who also stars as Cyd Sherman (aka Codex). It premiered on YouTube on July 27th, 2007". I was working in the video game industry at Electronic Arts at the time, and although, truth be told, I never got into World Of Warcraft or WOW as the kids called it... I still appreciated the intelligent writing of this show. It was clear that whoever was in charge knew what they were writing about, and didn't treat their audience like mindless dumb dumbs *cough* most network television *cough*. I have thoroughly enjoyed each season of The Guild, and I can't wait to see how Codex handles working for the company that built the game she and her friends love so dearly.

I'm very thrilled to be teaming up with the lovely Felicia Day and the fine folks over at Geek & Sundry as well as Jinx.com for "The Knights of Good". I've been a fan of The Guild for a while now, and after Comic-Con I contacted Felicia to see if we could work together on something to promote the upcoming 6th season of The Guild. It was very cool to find out that she herself was a fan of my work. She loved the idea and so I'm proud to present my latest artwork for "The Knights of Good - The Guild" 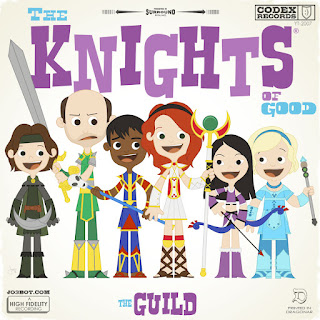 "They came from The Game to raid our hearts, it's The Knights of Good! With their new hit record "The Guild", Codex, Zaboo, Vork, Bladezz, Clara, and Tinkerballa get Guild'd with new songs like "Do You Wanna Date My Avatar" and "I'm The One That's Cool". So drop your loot and get your Beards extra Cheesy, The Knights of Good are waiting for you to join "The Guild".

*****Prints of this artwork are available in my Etsy store located: HERE
*****You can also (this is so cool!) purchase t-shirts of this design over at Jinx.com

Seeing what Felicia has done with "The Guild" over the years should be a huge inspiration for those of us who have had a rough time trying to fight their way through typical channels. Going your own route, doing what you love and believing in that vision is the best thing any creative person can do. Felicia Day has done it extraordinarily well and inspired a few people (including myself) along the way.

I'm honored to be a part of Season 6 of the Guild. It starts Tuesday October 2nd here at Geek & Sundry's youtube page. Be sure to subscribe and don't miss one episode of The Guild Season 6! Also, if you're new to The Guild and have a Netflix Instant Watch account, you are in luck! All 5 previous season are up and waiting for you to devour them. What are you waiting for? GO!

I want to give a special thank you to Felicia Day, Kim Evey, Geek & Sundry, and Jinx.com. I appreciate you all letting me be a small part of this excellent series.