It's that time of the year again! Gallery 1988 is holding their 4th annual "Crazy 4 Cult" gallery show. I have participated in several previous shows at Gallery 1988, and they were kind enough to invite me to participate in this show. 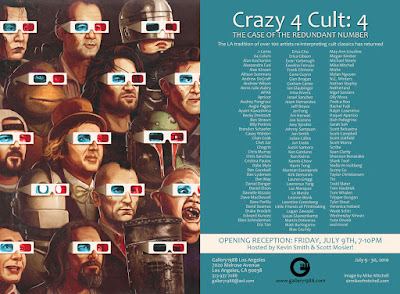 Crazy 4 Cult is a gallery show celebrating the unique love for cult movies. According to Wikipedia, "A cult movie is a film that has acquired a highly devoted but specific group of fans.". They kindly provided me with a list of movie suggestions, and as I went through the list, I felt that a lot of them didn't necessarily add up to cult status. Most of them were films that I loved, but I felt there was a sub-genre of space western missing from the list.

I remember seeing the ads for the show Firefly but I can't say that I ever watched it when it was on the air. I guess I wasn't alone in this because the show sadly didn't make it past one season. The show left on somewhat of a cliffhanger, and luckily there was a rabid enough fanbase that someone somewhere at Universal decided it would be a good idea to greenlight the movie "Serenity"

So, when I sat down to think about what movie I wanted to illustrate for the show, I decided I wanted to join the Browncoats . As with the show, I didn't see this movie in it's initial theatrical run, but instead on DVD... which i immediately purchased after blowing through season 1 of Firefly over a weekend. Anyway, one of the things that always seemed unique about the show was the opening theme song. It's a great little ballad written by show creator Joss Whedon that sets the tone perfectly for the entire series. Apparently the NASA astronauts are fans of this song as well, in February of this year they used it as a wakeup call on one of the last shuttle missions. Click HERE for a cool little article about that, including video from the shuttle!

A few years ago I got into collecting Vinyl records with artwork on the front. I've never really had a chance to design an album cover, and when I started thinking about what would be a fun illustration to do for Serenity, I thought since music was such a strong component of the show, that an album would be perfect. I was always a fan of old vinyl art of children's music so I wanted to incorporate a retro feel. It is a known fact that River Tam is a badass, but for now things have taken a lighter direction with "River Tam and the Fireflies" 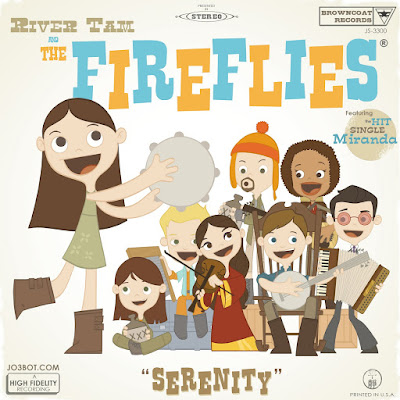 And here's the back of the album 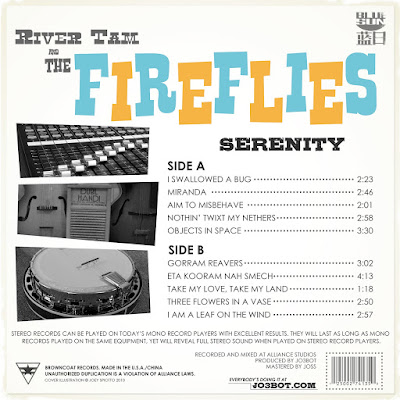 and the record itself 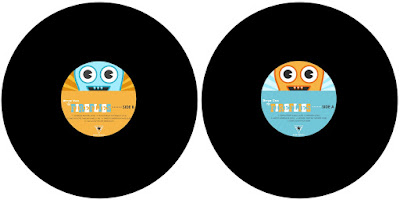 Since the soundtrack to Serenity wasn't actually released on vinyl, this record contains something special for whoever decides to purchase the full item from the gallery. Here's a quick shot of the finished product 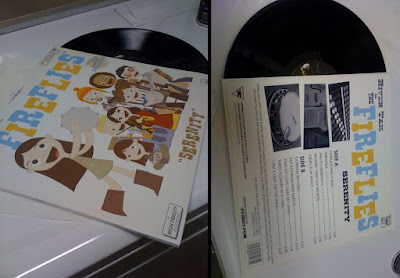 So if you're in town July 9th and want to come check out some great artwork by over 100 artists, do yourself a favor and come check out the gallery opening for Crazy 4 Cult at Gallery 1988. Kevin Smith will be there as the host for the evening as well

p.s. I got to meet THE creative genius Joss Whedon last year at a comic-con party... and I just wanted to share this picture because it's awesome! Beards unite! 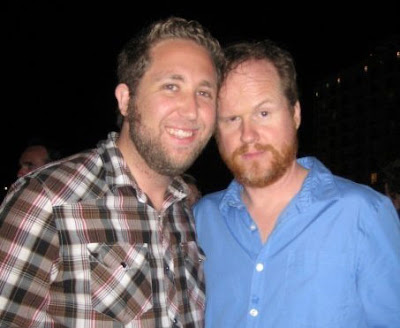