Here's something I never thought i'd ever say... I made one of Maxim's "Hottest Video Game Babes of 2008"!!! Now you might be thinking to yourself "but Joey... you're not a video game babe" and then I'll cry because it's true. But luckily... I can kinda draw, and one of the characters I designed for the Electronic Arts game "Dead Space" was chosen! Kendra Daniels was in good company with Zoey from Left 4 Dead, Sofitia from Soul Calibur, The Lolipop chick from GTAIV, Lara Croft, and my favorite, Chun-Li! See the full list HERE 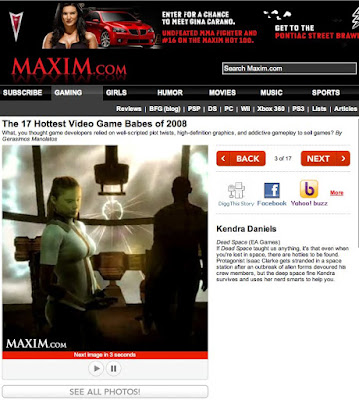 Here's a short overview of the work that went into creating Kendra. First... I was given a brief description of the character, her traits, role in the game, and a bit about her personality. Then I sat down and cranked out a bunch of ideas in rough sketches. The art director and I would then sift through the pages of sketches, picking out what we liked about certain ideas, shelving the ones that didn't quite work. After a round or two of that process, we had settled on three ideas that felt right for the character 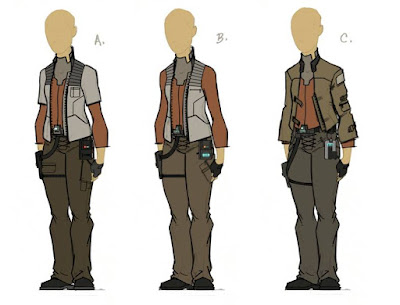 Then once we were happy with a direction for Kendra, i drew out a variety of possible hair styles. I was hoping to go the Ripley route with option I, but in the end, we went with a combination of G and K 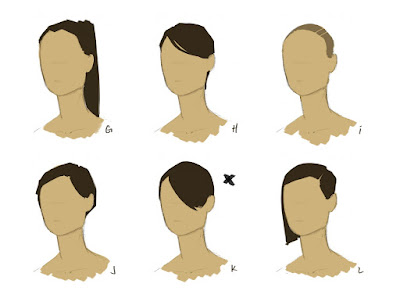 Then came the fun part of putting together modeling packets for the character to be modeled in 3D. One is the full model, with the jacket, and then one without. Also, each character had a "gore" pass in case the necromorphs got a little hungry. Texture details were called out for the texture artist to accurately render the different materials on her outfit.

The character of Kendra was brought to life by the lovely actress Tonantzin Carmelo (as well as some very talented riggers and animators). She got a chance to slip into a mocap suit and have her face scanned to become Kendra Daniels! Check out her website, she's awesome!!! Click Here 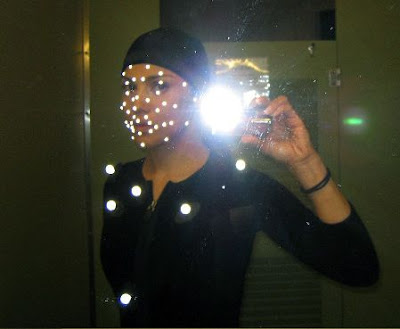 And here's the final render of Kendra that appears in the game... 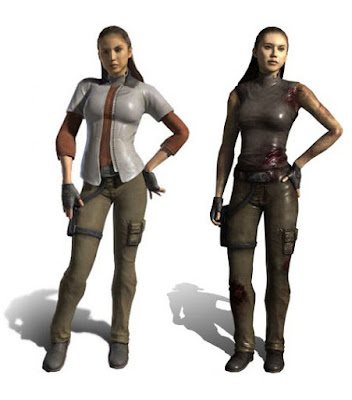