Over the past 2 years, work in the videogame industry has been a roller coaster of opportunity. One minute there's an opportunity to work on a great project, and then a month later, it's shelved with little explanation. I experienced this first hand at the end of 2008 when a game I had pitched to EA had seen quite a bit of interest from the powers that be. In the interest of the studio going a different direction and eventually becoming "Visceral Games", my game was killed before it could even take it's first steps. Too bad, it would be awesome! Sorry Joey, you're just not Visceral enough.

I have always felt that my work was more geared towards children, and well, most game companies don't make games for children anymore. As a result, I've always had an itch to work in the children's book industry. As a concept artist in games, I really enjoyed creating establishing images... images that can tell a story. I decided to make the move over to trying to do more of that with actual storytelling in children's books. Back in January of last year I wrote a story that I felt conveyed a lot of emotion, a great character arc, and an opportunity to explore some illustration styles that I just wasn't allowed to do in video games, and it felt great. It felt like I could finally breath and not be concerned with whether or not adult males 18-34 would find it "cool". I want to do more of that... a lot more of that. Earlier this year I joined the Society of Children's Book Writers and Illustrators And now i'm ready for a dose of reality of starting over 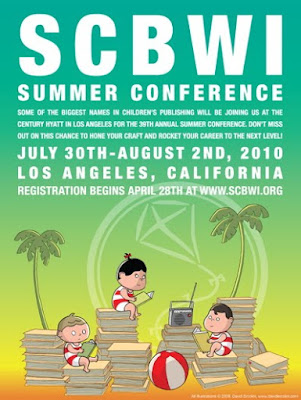 I'm very excited for this conference. I've been working on a portfolio geared towards children's book illustration work, and I'm happy to say there's not a Photoreal image to be seen for miles and it feels great.

For my portfolio I wanted to create some images that told a story in a simple and easy way. I had so much fun working on this image, I think I laid it all out in a day, and then finished it on day 2. 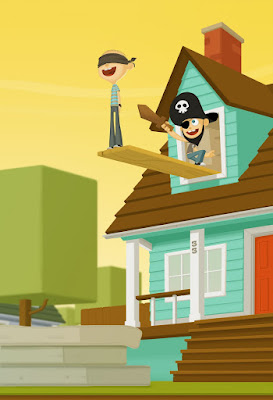 I'm both nervous and excited about my new adventure, I learned the hard way that no matter how many plans you make, NOTHING ever goes according to plan, so I feel a little bit like the kid in my painting above. I'm walking the plank, but smiling the whole time. Hopefully there are some mattresses to catch me if I fall.
Posted by Joebot at 11:46 PM 2 comments